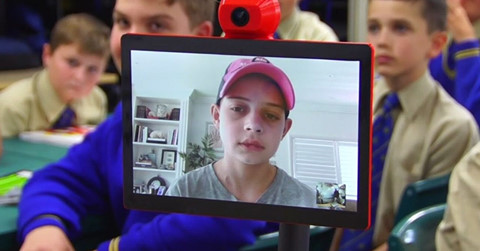 Telepresence robots that are situated in regular classrooms and are operated and moved in real-time by the student on their device from the remote location, such as home or hospital.

This means students that are not able to be in the classroom can connect with and participate in their regular school, even while physically absent.

When telepresence robots are deployed to meet a student’s social and emotional needs, the benefits to their emotional well-being usually flow on to support their academic needs as well.

The feasibility of maintaining connection between schools and students who are absent from their classrooms because of serious illness has been demonstrated across Australia through the telepresence robot pilot launched by Missing School in 2017 on funding from the St George Foundation.  While robots have been used around the world in individual schools, there are very few jurisdictions where the technology has been implemented at a systems level as a response to the needs of students with serious illness.

What can you do to get a robot into your child's school?

There are around 60 children across Australia who have a telepresence robot located in their class while they are at home.

Megan Gilmore, co-founder of “Missing School” says there is approval from the School of Special Education Needs – Health and Mental Health to have these robots installed in WA schools.

* To enquire if a telepresence robot might be available for your child’s school, first read the Flyer below, visit their website and contact the helpful people at “Missing School”: 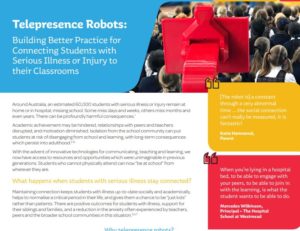